LaVision is a master at developing Particle Image Velocimetry (PIV) systems. Each system designed using PIV is developed for measuring under specific environments (i.e. under flowing movement in air /fluid motion in water)

With components including continuous wave and pulse lasers, high-speed and sCMOS cameras, all of them conveniently controlled with a precise timing unit, a FlowMaster system can be adapted to a wide range of measurement demands in all fields of fluid dynamics. 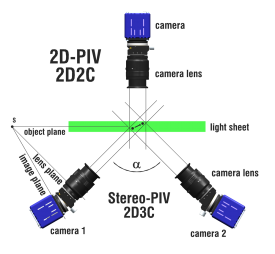 The flow is seeded with small particles which follow the flow. For planar PIV, the particles are illuminated by a thin (laser) light sheet, and the light intensity scattered by the tracer particles is recorded by one or more cameras.

With FlowMaster Stereo-PIV, all three velocity components (u,v,w) in a light sheet are measured (2D3C). It is based on the principle of stereoscopic imaging: two cameras capture the image of the illuminated tracer particles from different angles. Scheimpflug lens arrangements keep all areas of the measurement planes in focus.

FlowMaster Tomographic (Tomo) PIV is an extension of the FlowMaster Stereo-PIV concept and enables the instantaneous measurement of all three velocity components in a complete 3D measurement volume (3D3C).
FlowMaster Tomo-PIV systems use the same laser and camera equipment as in planar PIV setups, i. e. a direct migration from 2D- or Stereo-PIV to Tomo-PIV is straightforward best adding one or two cameras.
**Similar to FlowMaster, the Tomo PIV is also capable of self-calibrating, even for 3D reconstruction.

For the applications of the Tomographic PIV, click the brochure here. It explains how tomographic PIV works under different natural environments such as turbulent fuild motion.

Air seeding with µm-particles is not suitable for large scale PIV/PTV experiments due to their limited scattering power. Neutrally buoyant Helium-filled Soap Bubbles (HFSB) with a diameter of 0.3 mm and a response time less than 15 µs scatter 10000x more light than µm-particles and, therefore, are suitable for large scale PIV/PTV experiments in the lower subsonic regime.

Time-resolved 3D flow fields have been successfully measured behind a serial car in a large wind tunnel at Volkswagen. The field-of-view was 2 m x 1.6 m with a light sheet thickness of 0.2 m. The air flow was seeded with 0.3 mm in diameter Helium-filled soap bubbles applying seeding rates of more than 2 million bubbles per second operating 60 seeding nozzles.

Shake-the-Box is a purely particle-based technique using an Iterative Particle Reconstruction (IPR) technique in combination with an advanced 4D-PTV algorithm using the time-information for track reconstruction.

Pressure measurements are needed in many research areas and the common measurement method is the use of pressure taps, which is costly and time-consuming and limited to a small number of points. Therefore, groups from several universities and LaVision joined forces in the European NIOPLEX project which led to a Pressure from PIV package in DaVis 10.

The LaVision 4D solver provides direct access to instantaneous and average pressure fields from 2D-, Stereo- and Tomographic PIV data as well as from particle tracks (Shake-the-Box).
​
With only a few clicks, Pressure from PIV together with LaVision’s DaVis 10 software retrieves and visualises average pressure fields from all kinds of PIV and PTV velocity data either imported to or directly computed by DaVis. For time-resolved data, even the instantaneous pressure can be evaluated.

Don’t have what you are looking for?
Request us to help find it.