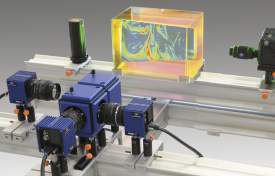 LIF imaging is a molecule specific visualization method with high spatial and temporal resolution. If the fluid itself contains no LIF-active species (like N2, CH4 or water), flow seeding with fluorescent markers (tracers) is used for scalar flow field imaging (Tracer-LIF).Laser imaging applications in fluid dynamics are numerous and cover high resolution imaging in microfluidics to large scale flow visualization in wind tunnels, fluid mixing and thermometry as well as the validation of CFD models.

LIF Principle LIF is a two step process: absorption of a laser photon followed by emission of a fluorescence photon from the excited state. For absorption the laser wavelength λL must match an allowed energy transition of the LIF-active molecule (atom).

​Only a fraction ΦLIF of these excited molecules fluoresces, the rest relaxes without light emission. An optical filter selects the usually red-shifted fluorescence light at the emission wavelength λLIF. Only the fraction η of all emitted LIF-photons is detected and converted to the camera signal SF.
​

A laser beam is formed to a light sheet (or volume) and intersects the fluid area of interest, e.g. in flames, sprays or thermal flows. The resulting fluorescence light from excited molecules in the light sheet is imaged through a selective filter onto a time-gated digital camera. For pulsed UV LIF applications usually an image intensifier amplifies the LIF signal. The conversion of LIF images into meaningful concentration or temperature fields is based on calibration measurements.

For time-resolved imaging the image frame rate has to exceed the time scales present in the flow and has to be increased accordingly for time-correlated measurements.

The turbulent flow field of a liquid jet is 3D in nature and requires for a complete understanding a 3D imaging approach, for time-resolved measurements a 4D imaging technique.
Tomographic (Tomo-) PIV using tomographic reconstruction for particle localization in 3D space is the most advanced and fieldproven technique for 3D flow field imaging today as well as its highspeed imaging version for 4D flow motion analysis.
Read More >>

Volumetric flame imaging based on tomographic reconstruction gives insights into the complex 3D-distribution of flame species. While multi-cameras are used in parallel to reconstruct the instantaneous 3D flame structure, time-averaged 3D flame imaging is possible with only one camera collecting consecutively the (laser induced) flame emission from multiple views.

For the detection of all LIF-active diatomic flame species such as OH, NO, CH, CN, CO a dye laser is added to the multifunctional FlameMaster system. Wavelength tuning and peak finding of the selected LIF-transition is under complete DaVis control. Precise dye laser wavelength calibration is carried out automatically recording the LIF-excitation scan of the selected diatomic molecule. For concentration calibration of the LIF signals a calibration burner is used.

For all laser imaging applications a pulsed multi-wavelength Nd:YAG laser is the standard light source. Upgraded with a T-YAG module (intra-cavity etalon) the laser also allows OH-LIF imaging. Only by changing the emission filter in front of the camera the desired in-cylinder process can be investigated. The crank angle resolved measurements are synchronized with the encoder signal of the engine supporting all engine operation modes such as cold start, skip-fired and acceleration modes.

Laser Imaging enables instantaneous detection for important species in reaction kinetics like CH & OH, and is able to resolve the distribution of prominent pollutants like NO.

LIF is a technique with high selectivity. It is possible to selectively address species to emit light even in combustion environments where hundreds of different species are present. For small, typically diatomic molecules single quantum states can be detected which allow to determine gas temperatures even under non-equilibrium conditions.
Due to the spectral shift of the LIF emission unwanted interferences from stray light or Mie scattering can be effectively suppressed.
LIF imaging is particularly attractive due to the strength of the resonant absorption process compared with the non-resonant Rayleigh and Raman techniques Due to this sensitivity, techniques like LIF has the capability to detect flame radicals and other species at the ppm or even sub-ppm level. Sensitivity and selectivity are the two main advantages of the LIF technique.